There are four basic steps involved in the process of cheese making. They include curdling, draining, pressing, and ripening.

Cheese is a popular food in the Mediterranean diet. It is an excellent source of protein. So, here’s a little insight into the process of cheese making.

Check out this Cheese Making Recipes:

Cheese is made by draining the whey, which is the moisture or serum of milk, after the coagulation of casein (the major milk protein).

It is a preserved food which is made from the curd of milk.  It is a concentrated, nutrient-dense food and it can be fresh or matured product.

It is actually made from fermented milk from which a specific amount of the water and lactose has been removed.

The quality of the milk used in cheese making is extremely important and rigidly controlled.  Most cheese is made from pasteurized or heat-treated milk.  Pasteurization is not a substitute for sanitation, but rather an additional safeguard. 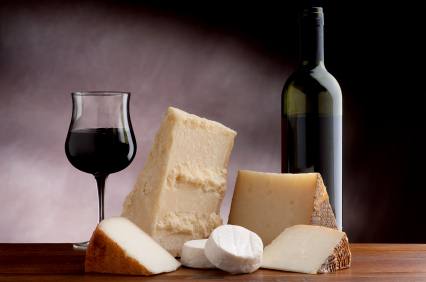 Classification is decided upon by milk source, moisture content, and processing method.  There are five classifications of cheese:

1.  Fresh cheese:  these are soft and whitish in colour.  Their flavour is very mild, and they are not aged.  Some examples include cottage cheese, cream cheese, ricotta cheese, farmer's cheese, pot cheese, and feta cheese.  These cheeses have a high moisture content (usually over 80 percent.)

2.  Soft cheese:  some examples include Brie, Camembert and Hispanic cheeses.  These cheeses are aged for only short periods of time.  The water content of these cheeses is approximately 50 to 75 percent.

3.  Semi-hard cheese:  these cheeses have more moisture less moisture (40 to 50%) than the fresh or soft varieties, and include Roquefort, blue, brick, Gouda, Edam, and Stilton, to name a few.

4.  Hard cheese:  again, the moisture content is lower than semi-hard cheese (approximately 30 to 40%.)  The best examples of hard cheeses are Cheddar cheese and Swiss cheese.

5.  Very hard cheese:  as can be assumed by their classification, these cheeses do not slice well, but they can be grated or crumbled.  Their moisture content is less than 30 percent.  These cheeses also have the longest aging time, and include Romano cheese and Parmesan cheese.

How Cheese is Made 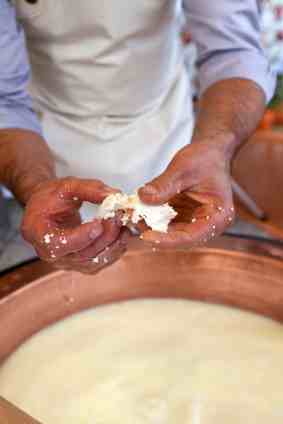 Milk is put into large vats.  It is then warmed, and then a coagulant is added and, if desired, colour.  The mixture is all stirred together and allowed to stand.  This allows the curd to be formed.

Next,  large cutters are used to cut through the curds and separate them.  The whey is drained off from the bottom (this process is called “ditching”).  When finished, the curd is quite soft.  If not further finished, it is called “unripened cheese” (i.e. cottage cheese), and may be made into cream cheese by pressing it so that more fluid is released from the product.

To ripen the cheese, the curd is then submitted to varying degrees of heat and pressure depending upon the texture desired.  Bacteria or mold is added, then the curd is compressed.

The cheese is then put into hoops.  Various kinds of cheeses are always put in the same shaped hoop – square, oval, etc.  The hoop is usually lined with cheesecloth.

It is then removed to the curing room where it is left for long periods of time, depending upon the type of cheese that is being made.

The temperature of the room varies from 40 degrees to 65 degrees F, and is usually about 55 degrees F.  As it stays in the curing room, bacteria or mould work through the cheese, causing different flavours (the chemical and physical changes include aroma, texture and composition).

Unripened cheese is immature green cheese which is rubbery and crumbly.  It improves as it ages.

There are different methods of producing and curing cheeses – it depends upon the locality in which the cheese is made, as well as the type of milk (i.e. sheep, goat, cow, buffalo, etc.) that is used in the process of cheese making.  Ultimately, it is the curing and the ripening that determine the uniqueness of the cheese.  There are approximately 18 – 20 basic types of cheeses.

Cheese making is a skill that began as far back as 9000 B.C., and possibly even before that!  Most cheese making was done in the home - a sharp contrast to the large production facilities that are common today.