Looking Into
the Causes and Dangers
of Childhood Obesity

Keep your children away from the dangers of childhood obesity.

The leading cause of childhood obesity is poor eating. Many children eat far, far too much refined sugar and empty carbohydrates.

They eat far too much hydrogenated oil and cooked table salt.

Their diets are out of balance because public schools buy the lowest quality food and because their own parents typically also have poor diets.

The best thing you can do is to feed him/her with Mediterranean diet foods.

And if you want to try something new, try making your child a healthy meal from my Free Diet Meal Plans.

The dangers of childhood obesity are played down because too many adults assume that when a child is overweight, they are just going through a lazy phase or a phase of bad eating habits and they will soon enough mature and grow out of it.

It's then assumed that when they grow out of this phase, they will automatically start doing different things that undo the childhood obesity causes.

In fact, there are some parents who falsely assume that if their child is overweight it's just a natural part of the growth process and they will naturally just shed the unwanted pounds at some point in early adulthood.

So, chief among the dangers of childhood obesity are the sheer ignorance that it seems to inspire in people who really should know better.

Fat children are not normal, and a society that sees them as such has got something wrong with it. The causes of childhood obesity do not include "baby fat" that just keeps hanging around. 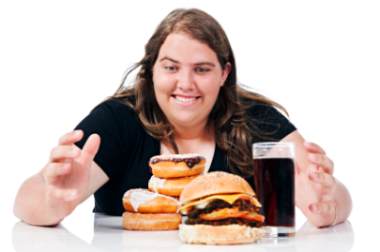 The causes of childhood obesity can include genetics, environment, diet, and level of physical activity.

The dangers of childhood obesity loom large and include:

This certainly can and often does play a role in fostering the dangers of childhood obesity.

Today, children are encouraged more than ever to lead sedentary lifestyles.

Needless to say, there are modern parents who aren't like this, but this does describe the majority of them.

But even children who come from households with physically active parents are still encouraged into sedentary lives.

They sit at at desk in school, then they come home and sit down to do any homework. They then sit in front of the television or in front of the computer, or they sit and text message each other from their cell phones. They also do a lot of sitting around playing video games.

They are encouraged to watch sports, but not to play them.

If you have an overweight child this is a wake up call. With the Mediterranean diet you can't go wrong.

Feed your children well and you will teach them well.

Return from Dangers of Childhood Obesity page to Research on Obesity